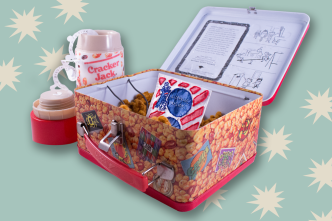 Early in the year, I happened upon what turned out to be the first outing of “Multitudes,” a project through which artists received a random object — in this case, a Rolodex — and interpreted it with words and colors and photographs and…anything they liked. The nice folks at Container ran it, and since I have a special place in my heart for this sort of thing, I asked if I might participate in the future. I was delighted to hear them say yes.

Skip forward to this fall, when my object — a vintage Cracker Jack lunchbox — arrived on my doorstep. What a treat (literally!) to have the chance to interpret such an interesting shape. Would the box be the “covers”? What would constitute pages? And, how might I dredge up the creative memory I needed to make a connection to something I never used myself?

The result was “Joke Explosion,” and I’m pleased to say it was purchased by the kind folks at the Albin O. Kuhn Library at UMBC (Go Retrievers!!), which has an excellent collection of artists books among other things. Below you’ll find the statement I wrote for the Container site. What a wonderful experience…thank you, Container!

This project is part of Container’s Multitudes series, which invites writers and artists to transform the same object into works of visual and literary art. In this series, participants were invited to interpret a vintage metal lunchbox. Proceeds from the sale of these items are split equally between Container and the artist.

ARTIST’S STATEMENT
When I saw my lunchbox for the first time, I was SO excited. I have always loved the packaging for Cracker Jacks — especially the tiny folded joke prize booklets. I love the little structures, and I adore the fact that the jokes are always terrible. Thinking on this, I was reminded of the way, as kids in the cafeteria, we would try to make each other laugh so hard we’d spray our milk out of our mouths (or, worse, our noses). Thus, this project was born.

I use fabrics and Tyvek a lot in my work, so I decided it would be a fun challenge to make caramel corn out of yarn knots and Sculpey peanuts. If you dig into the pile of popcorn, you’ll find the Cracker Jack prize — an embroidered envelope inviting you to “Guess What’s Inside?” Inside the envelope is a joke book containing my favorite bad joke in the world: What’s brown and sticky? (Answer: A stick.)

Assuming you’re “eating” the popcorn, you’re also “drinking” the milk inside the Thermos. And since the joke is so ridiculously funny/bad, the poem inside the Thermos (written on a spiral of droplet-covered white Tyvek) is a haiku about losing said milk to the hilarity.

It’s quite possible this is only funny to me…but that’s where the box took me. And, I’m guessing I’m not the only one ever to shoot milk out of her nose. 🙂

what’s up is down…